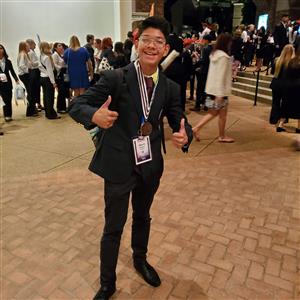 He took third place in the pathophysiology event.

Before heading to the International Conference, Bolanos placed first in the Pathophysiology test in the Arizona state competition. Only the top 5 from each event are given the opportunity to go to Internationals.

"I saw it as an opportunity to show that the students at YUHSD are allowed to and deserve to follow their passions,” Bolanos said. “I know this award will just be one of many from the district’s students.”

There were students representing different cities across the United States, as well as other countries such as Canada, China, and South Korea.

“Walking through the event halls, it was my goal to show that the students from YUHSD - from Yuma County - have the power to achieve just as much as anyone else,” Bolanos said.

HOSA is part of the Career & Technical Education (CTE) program at YUHSD and has more than 200,000 members nationwide.