Baseball teams across Yuma Union High School District opened practices on Feb. 10. For the third consecutive season, all five teams are led by former YUHSD student-athletes. Here is a comprehensive preview of the coming season from their perspective:

Blake Avila, SS/P, who finished runner up for the Offensive Player of the Year. He was also 1st Team All Region. He had a 3-0 record with an ERA of 2.93 as a pitcher, and finished with a batting average of .405 with 30 hits and 18 RBIs.

Walker Mellon, DH, has played varsity four years. He has a .333 batting average with 18 hits and 14 RBIs.

Alex Guerra, a junior transfer pitcher and center fielder from Tombstone High School. His sophomore year, he batted .444 with 28 hits and 22 RBIs and a stunning .619 slugging percentage.

Kuzniak said, “I feel like we will go out and always try our personal best and compete every pitch, every inning and every game. Controlling the process is all we can do, we had a great season last year and won our Region for the first time in a while so it was a great accomplishment, but all of those awards and accomplishments mean nothing this year. We have to go out and work twice as hard.”

More from Kuzniak: “I’m excited for this year's team and group of players. We have a solid group of experienced returners and we even added one of the greatest coaches in the state as our new hitting coach. Coach Mike Thiel was the head coach for Cibola until 2000 and then has been at 6A Mountain View in Mesa the past 19 seasons. He has over 500 wins, is a three-time Coach of the Year, and State Champion. He brings a wealth of knowledge to our coaching staff and I am personally trying to lean on him and learn as much as I can from such a great coach.”

Joe Caudillo is a versatile sophomore who plays almost every position and had 4 appearances last year in JV and had 1 start during the season.

“We have a good core group of kids returning this year,” Johnson said. “Every single one of these guys is coachable which in turn makes them a team player. The ‘buy in’ from them should be one hundred percent, and from there we are able to lay a solid foundation to build off. Another upside is that they are all good guys which makes my job easy.”

More from Johnson: “I'm looking forward to getting back out on the field with the guys. The longer I do this, the more I realize that being around the players and helping them shape themselves into quality young men is the joy in this. I preach winning, and competitiveness to the utmost, I wouldn't be a coach if I didn't. But, I'm grateful that I get to try and instill value, hard work, and some structure into these guys. I find it just as is important, so that when they do step off the field, they are better for it. It's a long season, but if they can buy into that, then, how can it not be successful?”

Manny Duarte, INF, had a .237 batting average with 18 hits and 11 RBIs and followed those up with 7 stolen bases for the season.

Bryan Arellano played 16 games on JV and had a .278 batting average along with 10 hits and 9 RBIs.

“I think our biggest strengths coming into the 2020 season is our team chemistry and our pitching,” Jones said. “We have a positive group of returning varsity players that have common goals in mind for the season. Our players go really well on and off the field, and their ability to play for each other instead of themselves this season will put them in a position to win some ball games. Our pitchers, Esteban Hernandez, Anthony Yee, Jacobo Camarillo and Issac Araiza will have a huge impact on the success of our ball club and will be in very important leadership positions on our path this spring.” 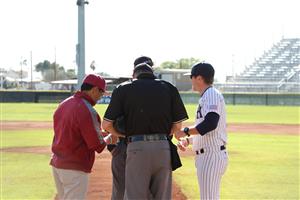 Collin Pisaeno, as a pitcher, held opponents to a .238 batting average and struck out 20 batters. As a hitter, he batted .275 with 14 hits, and only struck out twice.

Alan Roldan, OF, posted a .231 batting average with 12 hits and 6 RBIs and had a marvelous fielding percentage of .947.

Cruz Galvez, C/OF, batted .233 with 7 hits and one of those being launched over the wall for a home run. He also finished the season with a whopping .400 slugging percentage.

Oscar Garcia is a utility player, who put up a .333 batting average with 12 hits and one triple on the season. Garcia would finish the season with an .859 OPS percentage.

“We are excited about a number of young players that have been working hard this off season, but we will have to see how they develop and contribute to our varsity team,” Leon said.

“I think our team's strength for this season is their willingness to work and try new things,” Leon added. “We have changed our approach to doing things a little bit and our players have embraced the change.”

Manuel Gutierrez, as a utility player, batted .424 with 25 hits and 12 RBIs, including 9 stolen bases, and an astounding OPS of 1.013. The athlete they call “Kike” has only played one year and made his mark on the varsity team. 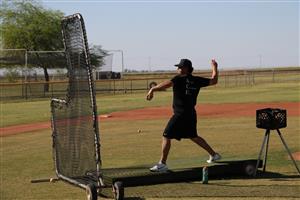 Martin Miranda, INF, has been in varsity two years and was able to capitalize last season with a .345 batting average with 19 hits and 14 RBIs, and a fielding percentage of .966.

Ohan Zabalza, C,  posted a fielding percentage of .993 as a sophomore and helped his team out by providing 7 RBIs with a .265 batting average.

Gabriel Valenzuela started in the outfield and made his mark by batting .273 with 18 hits and 13 RBIs, and had a perfect fielding percentage of 1.000.

Pablo Garcia was a very limited player last year, but maintained a .385 batting average in his 11 games players, and had an OBP of .500.

“It's all about work ethic with these younger guys, and who wants it more,” Castillo said. “It'll be fun to see the up and comers compete to try and fill any absent spots in the lineup.”

“Our defense will be our biggest strength,” Castillo added.

More from Castillo: “We have one pitcher coming back who threw more than 11 innings last year. He threw 30 plus innings so we will have to lean on our defense to be the difference maker this year. San Luis has always had a 1-2 punch. Right now, we will have to see who steps into the role of a starter.”