YUHSD to participate in Arizona ShakeOut a week early 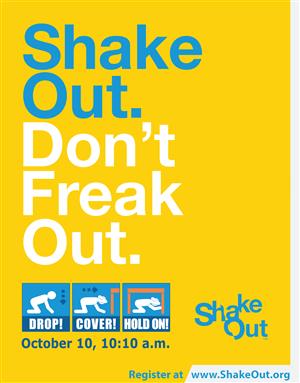 Yuma Union High School District schools will once again take part in the “Great Arizona ShakeOut.” This time it will just happened a little earlier.

YUHSD schools will practice earthquake safety as participants in the ShakeOut on Thursday, Oct. 10, 2019. However, the official date of the international event is the following week. YUHSD opted to participate a week early due to the timing of their Fall Break the week of Oct. 14.

The Great Arizona ShakeOut is an annual opportunity to practice how to remain safe during high magnitude earthquakes: "Drop, Cover and Hold On," according to the event’s official website (shakeout.org). It has also been organized to encourage individuals, their communities, schools, and organizations to review and update emergency preparedness plans and supplies, and to secure space in order to prevent damage and injuries.

The expectation is that no matter where you are at 10:10 a.m. you should Drop, Cover and Hold On as if there was a major earthquake occurring at that very moment, and stay in that position for at least 60 seconds.

“If they learn how to do it now, it’s something they will know how to do the rest of their lives,” said Arizona Geological Survey Research Scientist Michael Conway, who also coordinates the event for the state.

More than 80,000 Arizonans are expected to participate overall this year with a majority of participants being made up of K-12 schools in the state. In Yuma County, 35,251 participants have signed up, as of Oct. 8, according to the ShakeOut’s official website. All YUHSD campuses are registered.

YUHSD schools are using the ShakeOut day as an opportunity to practice widespread emergency preparedness as well. Some schools will discuss the importance of being prepared in class following the event, while others will conduct other emergency drills throughout the day.

It is the eighth year Arizona has participated in the worldwide event. Nearly 52 million people annually take part in the shakeout across the globe.

According to the Arizona Geological Survey, Arizonans have experienced more than 3,000 earthquakes since 1852, including a magnitude 5.3 near Duncan, Arizona in 2014. The Arizona Seismic Belt, which runs from the north-northwestern to the southeastern part of the state, has incurred multiple earthquakes above magnitude 3.0 with a magnitude 5.0 or higher occurring nearly every 10 years or so.