More than 120 Yuma Union High School District students were challenged by McCarthy Construction on Friday, May 3, 2019 to either sink or swim, or, in this case, float.

Teams of students from Cibola, Gila Ridge, Kofa, San Luis and Yuma high schools were given two large campaign signs, four small signs, a roll of duct tape, and a small towel with the goal of constructing a water craft that would float with at least one person aboard. The contest, known as the inaugural “Float Your Boat” challenge at Valley Aquatic Center, utilized scientific ingenuity, engineering precision, and, perhaps most of all, a great deal of creativity. 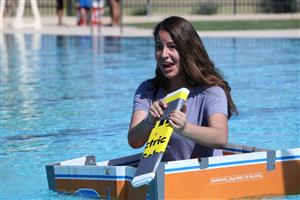 “This was an opportunity to have fun and build some stuff at the same time,” McCarthy Construction Project Manager John Kovesdy said. “You’re applying some stuff from your classes that you’re not even realizing when you’re building these boats. You’ve got calculus with buoyancy, physics with structure, and you’re basically making ends with what you have. It’s awesome to see these kids’ creativity. We had 20-plus boats and I don’t think a single one is the same. That’s exactly what we wanted to see.”

The day consisted of two challenges and, of course, there were some boats that were more successful than others.

“We went for a basic design,” Creekmore said. “Everyone was trying to overthink it. They think they need to use all of their resources, but in reality simplicity works.”

For the second challenge, students were allotted a two-hour time limit to construct the fastest boat. All completed boats were placed in the water and raced across the pool. Gila Ridge High School engineering students Bailey Warren, Christopher Aguirre, and Gustavo Avina built a craft shaped like a kayak that outlasted the nearly 25 other boats racing.

“I didn’t think we were going to win at all,” Warren said. “I had been kayaking before, so when we were building the boat I knew what a structurally sound boat should look like. So, we decided to build the boat around me because I was the shortest and the lightest.”

A team from Kofa and a team from San Luis rounded out the top three in the main race. One boat was selected from each school for a race of champions-style event to conclude the morning.

Winners from the first challenge received a $50 gift card provided by the Press Café & Bistro, while RL Jones Insurance provided $75, $50 and $25 gift cards, respectively, to the top three finishers in the second challenge. In addition to organizing the event and providing supplies, McCarthy Construction presented new tool belts to the school race winner.

This was the third year that McCarthy has partnered with YUHSD to hold a Science Technology Engineering and Math competition using limited raw materials. In previous competitions students were challenged to build planes and kinetic cars. 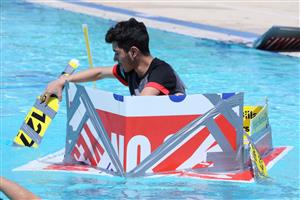