“This group has to be one of the hardest working groups I’ve had the pleasure of working with,” Winter Guard coach Anthony Mosqueda said. “We rehearsed every Tuesday and Thursday from 4-8 p.m. and we also had six Saturday rehearsals that ran from 8 a.m. to 8 p.m. All in preparation of the competition season, we still have more rehearsals to tweak and clean areas of our show that the judges really didn’t understand or came off as not being in unison. We are preparing for our next competition and for State Championships.” 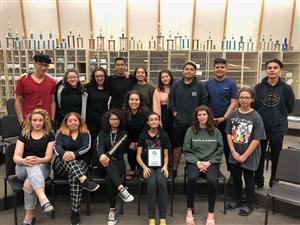