Yuma Youth Town Hall, in its sixth year, broaches topics of civic importance, annually bringing together more than one hundred teenagers from around Yuma County to engage and offer solutions.

“It’s important to have the voice of our youth,” said YUHSD Governing Board Member Shelley Mellon, who also helped organize the town hall. “They make up the families of our community. How can we support them? How can we support those who have experienced trauma and poverty and how can we as a community make our quality of life even better?”

The first portion of the town hall consists of networking. Students talk to representatives from colleges and various agencies about future career paths. They play teambuilding games and warm up for the work ahead.

The second half of the day is focused on a central topic, which the past three years has aligned with the Arizona Town Hall issue. Students heard from Yuma Justice of the Peace, Juan Guerrero, during a keynote address, and broke into groups with discussion prompts such as “what characteristics make up a strong family with thriving children?” and “what barriers do families in our community face?”

From there, students presented their ideas to the larger group with the goal to produce an overarching resolution that is shared at the county and state level.

“This is a topic that I believe applies to everybody,” Yuma High School student David Amavisca said. “It’s also something that’s extremely crucial in someone’s development as a leader and as a student and whatever career they choose to pursue.” 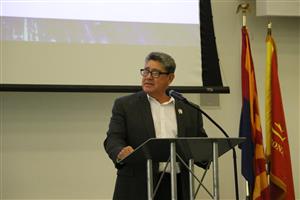 Judge Guerrero was born in Yuma and raised in Somerton. He is a graduate of Kofa High School, AWC and the University of Arizona. He also attended Empire College School of Law. Judge Guerrero served ten years as a Navy Hospital Corpsman with the 1st Marine Division out of Camp Pendleton, California and the Marine Corp Base, in Kaneohe Bay, Hawaii, after having graduated from the Naval School of Medicine and the Field Medical School in addition to being a war veteran.

After his military service, Judge Guerrero returned to Yuma and joined the Yuma County Sheriff’s Department where he served the community as a Patrol Deputy and Detective. He has also served as a Patrol Commander for the Cocopah Tribal Police Department. Judge Guerrero has been a Law Enforcement Instructor for the AWC Police Academy and is a State Certified Private Investigator.