Yuma Youth Town Hall started in 2014 with around 30 students meeting to discuss a topic of prevalence for teenagers around Yuma County.

Half a decade later, the annual event, which was held Friday, Oct. 19, has exceeded more than 170 participants, including students from all six Yuma Union High School District campuses, community and business leaders, and postsecondary education institutions. It even has a waiting list.

“It’s students all across Yuma County and we come together to look at and see different schools and career opportunities,” said Gila Ridge High School student Talen Osborn, who is also a member of Yuma Youth Leadership. “Being able to look at those we are able to get a glimpse at what our community is focusing on, and it helps us embrace our community.”

The first portion of the town hall, which takes place annually at Arizona Western College, consists of networking. Students talk to representatives from colleges and various agencies about future career paths. They play teambuilding games and warm up for the work ahead. 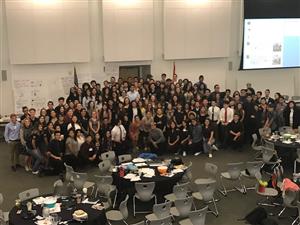 The second half of the day is focused on a central topic, which the past two years has aligned with the Arizona Town Hall issue. This year’s theme was Law and Public Safety in Yuma County. Students heard from Arizona Supreme Court Justice Andrew Gould, during a keynote address, and broke into groups with discussion prompts such as “how could the justice system be enhanced” and “how does criminal justice affect families, schools and communities in Yuma County?” From there, students presented their ideas to the larger group with the goal to produce an overarching resolution.

For many students it was an eye-opening conversation. “When we think about criminal justice we think of police officers and judges sitting there with a gavel, but really there’s so much more to that,” Kofa High School student Oscar Ferguson said. “One of the student’s I was talking to said he knew two people who got in trouble with the law, but because of that they sought rehabilitation, which is also a part of criminal justice. It’s interesting to learn more about all of the different elements of criminal justice.

Alicia Cabrera Soto from Yuma High School added: “I thought it was a great opportunity to learn new things about law and public safety and to get to know people from other schools.”

Shelley Mellon, who owns R.L. Jones Insurance, is a member of the YUHSD Governing Board, and helped organize Friday’s town hall, has been a part of the event since its inception attributed the growing number of participants to YUHSD students’ commitment to critical thinking and a fun-filled schedule.

“We’re thrilled that this is the largest Yuma Youth Town Hall that we’ve had,” Mellon said. “I believe that it’s because of the success of the students. The students run this town hall. They engage with one another. They meet new friends. They learn how to problem solve together. We feed them a lot of candy and pizza and we all have a lot of fun. So, I think people hear about it and they want to get on the waiting list for the next year.”