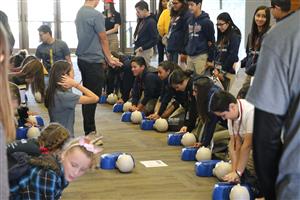 As part of the 2019 Middle School Leadership Conference and Expo, CTE students, faculty, and administrators welcomed 894 seventh and eighth graders from Yuma, Somerton, and San Luis. It was the largest group to ever attend the annual event.

Numerous booths were set up around the exhibition hall at the Yuma Civic Center, each featuring a CTE program. YUHSD students representing their respective program shared a hands-on activity with the middle schoolers. Stopping by the culinary arts booth, for example, meant you were frosting sugar cookies, while visiting the film and TV booth meant you were recording something in front of a green screen. Middle school students presented a “passport” at each booth they visited and received a stamp for completing an activity with high school CTE student ambassadors serving as tour guides.

“To have our students showcase their programs, it builds pride in the program and it gives them an opportunity to reach into the middle schools,” Kofa High School CTE Instructional Leader Norm Champagne said. “A lot of the students are reaching out to schools that they came from. So, that there’s a sense of community that they build. For the middle schooler coming up, everything we see and read, says that the earlier they start on a career path the better they’re going to be. They’ll be more focused on what they want to end up with. So, if we can start them at the middle school, when they get to the high school they’ll already know what options are open for them and focus on those.”

In addition to providing displays from various programs, CTE student leaders provided breakout sessions addressing topics such as communication, decision making, teamwork, multicultural sensitivity and awareness and much more. There were also stations for hands-on CPR and details about Career and Technical Student Organizations offered throughout YUHSD.