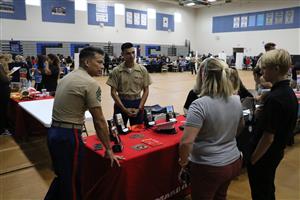 The fair rotates in Yuma between four campuses each year and is open to all students throughout Yuma, San Luis and Eastern Imperial Valley. San Luis High School has traditionally hosted its own fair for senior students the following morning.

Between the two fairs nearly 1,000 students were able to get information from Arizona's major universities, community colleges, military academies, and career opportunities. Families were also able to fill out Federal Student Aid identification information and complete FAFSA applications in rooms separate from the main hall of the fair.

“I came to the event to see what I might want to do with my future,” Christian, a Cibola student in attendance, said. “I wanted to see what I could do to help my parents, maybe save them money and find out about what kind of college opportunities are out there.”

Gila Ridge’s event had 45 total vendors on display, while 32 were present at the San Luis event. Overall, it is one of the largest contingents in the event’s history.

Here is a list of some of the organizations who attended one or both fairs:

The Antlers of the Yuma Elks Lodge # 476

The Conservatory of Recording Arts and Sciences

FOR A GALLERY FROM THE EVENTS, CLICK THE PHOTO.