Yuma High School Student Council had an idea for changing the game in the local community and on Tuesday night they were unexpectedly rewarded for it.

The school was presented with the Arizona Diamondbacks “Game Changers” Grant worth $5,000 prior to Tuesday’s Diamondbacks game at Chase Field against the Pittsburgh Pirates. More than 100 Yuma High students and faculty were on-hand to accept the grant and take in the game.

“A lot of our kids have never been out of Yuma, and they got to go to a Major League Baseball game,” YHS Principal Bob Chouinard said. “Just seeing them smile and so excited to be there is great for morale and community building on our campus. Overall, we are grateful for the grant funding, but the Diamondbacks’ generosity goes beyond that. It was just a great reward for students who are credit-current and have displayed positive behaviors at Yuma High School.”

The grant, according to the team’s official website, is a new and exciting charitable initiative designed to inspire the thousands of students who represent student government and student leadership from Arizona high schools. Under the direction of dedicated teachers and advisors, these outstanding student leaders are shaping the future of our community with creativity, acceptance, perseverance and a tireless commitment to education and creating a brighter future for themselves and each other.

The Arizona Diamondbacks Foundation and The Husband and Wife Law Team have awarded schools around the state with a $2,500 charitable grant to implement student government projects, concepts or ideas designed to improve campus culture, student engagement and create an educational environment that is safe, inclusive, innovative and inspiring for all students.

The Criminals were awarded double that amount for an idea to put on a benefit concert and art show that would generate funds for local shelters.

“After applying we received an email and [the Diamondbacks Foundation] loved the idea of our show, where the proceeds would go towards overcrowded shelters in Yuma due to the recent state of emergency that our Mayor called,” YHS Student Body President David Amavisca said. “They invited us to go up to Phoenix to present more on our idea, we went and they gave us double the original amount planned to make sure this show goes as great as possible.

“When they told us that about the funding we were all super excited, but when we found out we also received over 100 tickets to a game where we'd be recognized on the field we knew we had to take the school. Family, friends, and classmates all got to watch us represent our school on Chase Field and it was an incredible feeling. Coming from a school where we're constantly fighting the stigma associated with us, it felt good to be able to prove those stereotypes wrong and show everybody that there is so much more to our school than the rumors. We had to keep the recognition a secret so when our section with almost 100 students from Yuma High saw us, you could hear them all yelling and cheering us on, even though we were three floors below them. It was just an amazing experience to be able to celebrate with the people we work so hard for and seeing it all pay off. It’s the beginning of some cool stuff we're going to do.” 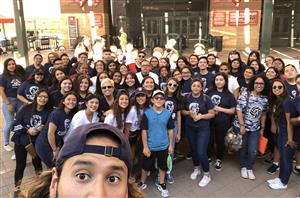