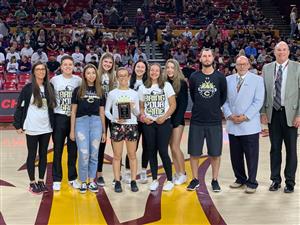 “I'm extremely proud of our student-athletes for how much they take pride in combining their talent with playing the right way on the court,” Cibola Athletic Director Brett Pavey said. “They are very deserved of the sportsmanship award.”

In five seasons as head coach, Anthony Gerg has led the Lady Raiders to a 92-46 record, including three-straight seasons of 20-plus victories. He has also had multiple players, including last season’s Regional Player of the Year Arlyssa Underwood, go on to play college basketball. Part of Gerg’s program is an emphasis on core values, including sportsmanship.

“We want to put [our girls] in a position to be as consistent as possible,” Gerg said. “We have four core values: having a positive attitude, your effort every day, your sacrifice, and competition.”

With a roster of only one senior, the Lady Raiders amassed a record of 22-5 (15-3 in AIA games) this season, winning the 6A Desert Southwest Region title.  Sophomore point guard Myna Johnson was named regional Player of the Year after averaging 14.8 points, 5.0 rebounds, 5.0 assists, and 4.5 steals over 24 games.