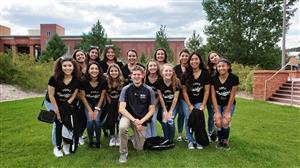 “I wanted to give the cheer team the full college experience in collaboration with the district's mission statement of ‘college and career’ ready students,” said Raiders Spiritline coach Tayde Lund.

Prior to the game, the 14-member varsity cheer team had a private campus tour with an NAU ambassador. The tour included a 2-hour in-depth look of NAU academic requirements for admissions and campus life. The team had the opportunity to see what a dorm room looks like in Wilson Hall as well as how meal plans work at the Student Union dining facility.

Along the tour, the girls experienced how Starship Technologies has partnered with the school’s food vendor Sodexo to bring a fleet of food delivery robots to campus. NAU is the second university in the country to get these coveted robots, following George Mason University in Virginia. The cheer team had the opportunity to be hosted by the NAU Native American Cultural Center where lunch was catered. It gave the team an opportunity to take in the campus sites during an outdoor picnic.

Upon arrival to the Skydome the team was greeted by NAU's assistant cheer coach and three current members of the university’s cheer team. The collaboration between Lund and NAU's head coach Rebecca Virgadamo was a successful opportunity for a “meet and greet” and a chance for the high school cheer team members to ask questions about the requirements to cheer at the college level.

Currently, 13 members of the 15-member CHS varsity squad are seniors.

NOTE: More photos of this event can be seen at https://luvuluv.smugmug.com/Nau-cheer-team-pix/