The sun is typically still tucked away behind the foothills east of Yuma when Richard Jaure begins his first workout of the day.

Jaure, a freshman at Cibola High School, is one of the fittest teenagers in the country. And as he climbs in the national CrossFit rankings, his goal of winning a world title in the grueling sport is inching ever closer.

“I run a saying through my head, ‘How bad do you want it?’ Jaure said. “And I remind myself how bad I want it, that I want it more than any other kid out there.”

A typical workout consists of weightlifting, cardio and gymnastics with constant variations of functional movements that is high intensity in an abbreviated timeframe. For Jaure, that means carving out time before and after school. 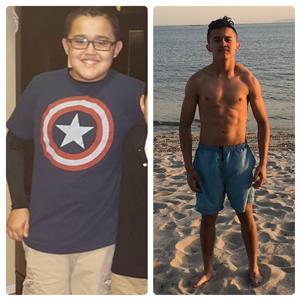 “I wake up at 5 in the morning and I work out where usually it's a strength and/or a gymnastic piece,” he said. “I go to school, come home, and eat something light to let it digest fast. Then, I work out from 3:30 to 7:30. From 3:30 to 4:30 I stretch and warm up my muscles to make sure everything is feeling ready for what is about to come. For the rest of the time, I do two conditioning workouts followed by another strength or gymnastic to end the day. Usually, I’m in the garage where my dad and I train together or we go to the gym and train there.”

Jaure said his father got him involved in CrossFit as a way to get him active. Before being committed his daily CrossFit regime, Jaure spent most of his time playing video games.

“I knew in the long run sitting in front of a TV would not benefit me,” he said. “I had a plan for my future and it was not going to be a couch potato; I was going to do something better.

“I was overweight and I always wanted to actually be good at something, but I never had the opportunity to do that and then finally CrossFit made sense for me. I always saw kids at school run and I was never able to, I wanted to be able to do all those same things with my body but couldn’t because I was so out of shape. I wanted to have a better lifestyle that I can fix when I’m young rather than later when it’s much more difficult.”

Fix it, he did. Jaure dedicated himself to working out and transformed himself, not just physically but also in the classroom and socially.

“[Being in shape] helps me present myself in a better state of wellbeing,” Jaure said. “It has helped me find an inner drive I did not know I had. It means a lot to me because it shows that every blood, sweat, and tear I put into the sport pays off.”

Gila Ridge High School teacher David King, who knows the Jaure family from CrossFit training added: “He's an amazing kid with great grades and character on top of being an exemplary athlete.”

With fitness competitions continuing throughout the next few months, Jaure hopes to qualify for the CrossFit Games in August. But qualifying isn’t enough.

“It would mean a lot to me because it would make me one step closer to my goal,” he said. “But it wouldn't make me satisfied because I would not have reached my entire goal yet of winning the CrossFit Games.”

In many ways, though, Jaure has already won.