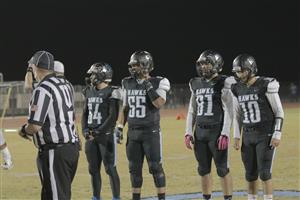 The game can be viewed on the National Federation of State High School Associations (NFHS) Network via live stream: https://www.nfhsnetwork.com/events/aia/gam1c16fc8771.

"It's exciting to still have football this late in November,” Gila Ridge Assistant Principal Steve Anderson said. “The team is on an historic run, and their hard work and commitment has helped them reach heights that are unprecedented for the program at Gila Ridge and Yuma Union High School District."

It is the first time Gila Ridge has advanced to the semifinals of the postseason in football, and is the first Yuma Union High School District football program to win two playoff games in the same season since 1952 (the first year AIA postseason records were kept).

“It's been huge for us to make it this far in the playoffs,” GRHS head coach John Ellegood said. “Our guys have put in so much hard work, and for it to be paying off is huge for us. What is also cool is how much love and support we are receiving from the community. After our first win against Coconino we got congratulatory messages from at least one person on every campus. It feels like we are representing the entire city, and that is a cool feeling to have. We are one of four teams left in the 4a conference right now, and that's pretty unreal. We can't wait to play this game, and see if we can extend the season all the way to the championship.”

Gila Ridge finished the regular season with a 9-1 record, matching three other YUHSD teams for the best finish in district history. They have won two postseason games since, both on the road, defeating Coconino, 10-9, and No. 1 seeded Sahuaro, 28-21.

Yuma High School was the last YUHSD team to win a state or conference title in football when they tied South Mountain in the 1959 championship game. The Criminals also advanced to the finals in 1960 and 1965.